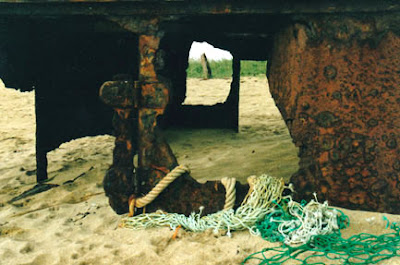 Before the Churchill barriers were built in Orkney, between the southernmost islands, a number of vessels - 'blockships' - were deliberately sunk to prevent U-boats sailing through and attacking the naval fleet which lay in Scapa Flow (as one did in 1939 to sink the  'Royal Oak')

This is the hulk of one which was several hundred yards off shore in 1981, was well-broken up by 2002 (when this was taken, and is now nowhere to be seen.
Posted by Sandra Davies at 06:15