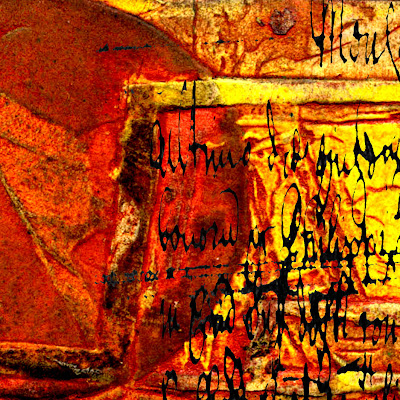 ‘Written in squid ink and signed with the Captain’s blood!’
‘It doesn’t smell of fish, and blood dries rusty.’
‘Not this!   The treasure map.  This tells where it’s hid.’
Mathias, having drawn my blood, forced Gabriel to release the letter.   Starvation rendered him irrational;  he clearly under-estimated our intelligence.
I snorted with disbelief:  Gabriel’s warning glance suggested he’d likewise under-estimated mine.  Flattering his recently-incarcerated brother, he said  ‘You forget I‘ve not your education, find it hard to trust in pen-scribed words.   Why risk your life, and threaten me and mine, for this?’
Hoarsely, eyes a-glitter, ‘Riches, brother, riches beyond compare!’

This is part 32 of 'The blacksmith's wife'.   The whole is a prompt-led serial  which began on the Friday Prediction, in March  and continued, one hundred words at a time, for forty-one episodes.   One of my aims in this 100 days project is to complete the illustrations for each episode and publish the tale in book form.    The  story can be read in its entirety here.
Posted by Sandra Davies at 07:08