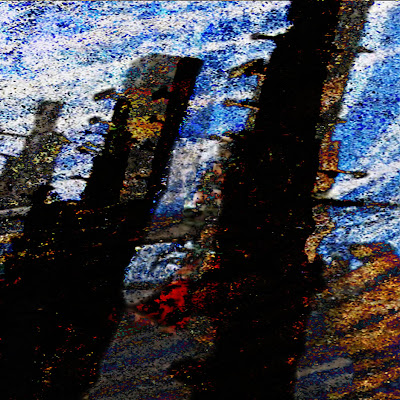 The head which had eclipsed the sun was roaring.
Stiff-angled fingers wrenched me as hard-spittled fury shouted of broke promises then raised me high to dangle over the dirty midden-wash ditch of debris from the half-demolished forge.
I’d time to wonder whether ‘twould be best to die from being dashed upon swarf-dusted shards of discard metal or drowned, weed-draggled and half-dressed.
Speedwell-eyes had turned to saffron as he scrambled to his knees then fled, caring not he left both me and horse behind.
His lack of chivalry and the death of my romantic dreams, laughter-doubled Gabriel, who safely dropped me.

This is part 36 of 'The blacksmith's wife'.   The whole is a prompt-led serial  which began on the Friday Prediction, in March  and continued, one hundred words at a time, for forty-one episodes.   One of my aims in this 100 days project is to complete the illustrations for each episode and publish the tale in book form.    The  story can be read in its entirety here.
Posted by Sandra Davies at 08:23