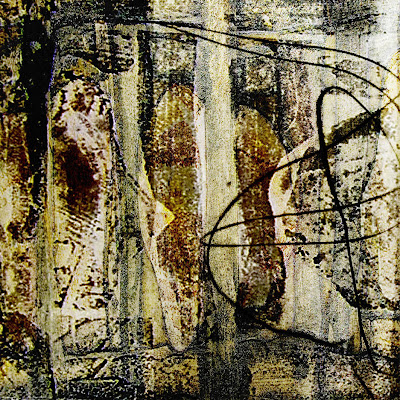 Despite forthcoming fatherhood, Gabriel allowed no languishing; still expected me to skin and gut the animals he brought home. So many were so often full of babes themselves and I disgorged in unaccustomed sympathy e’en as he ate, hand clamped to my quailing mouth as his clutched spoon and bowl of herb-steaming rabbit stew.
‘Coney-skins’ he claimed, ‘cleansed and stitched together – a winter coverlet for us, and another for the babe.’
‘Or a shroud for me if you persist in forcing me to make it!’ I one especially nauseous day did cry.
But it passed; I grew big, unaccustomedly contented.

This is part 38 of 'The blacksmith's wife'.   The whole is a prompt-led serial  which began on the Friday Prediction, in March  and continued, one hundred words at a time, for forty-one episodes.   One of my aims in this 100 days project is to complete the illustrations for each episode and publish the tale in book form.    The  story can be read in its entirety here.
Posted by Sandra Davies at 08:56