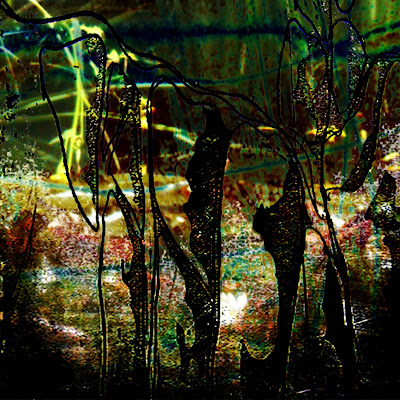 ‘Brother?’ (I had not been told) and while Gabriel belatedly tried to hide my nakedness by rearranging locks of hair and grabbing at an insufficiency of lily leaves I hid my interest, and the juddered rush of lust that shook the cockles of more than my heart, with haughtiness.
Neither man was fooled and the look that Gabriel turned upon me was such that had I been wearing boots I would have quaked in them with genuine terror, far more than hitherto.
The younger, better-looking man (his name?)  took it as challenge, feigned helpfulness and went and fetched the horse.

This is part 14 of 'The blacksmith's wife'.   The whole is a prompt-led serial  which began on the Friday Prediction, in March  and continued, one hundred words at a time, for forty-one episodes.   One of my aims in this 100 days project is to complete the illustrations for each episode and publish the tale in book form.
The  story can be read in its entirety here.
Posted by Sandra Davies at 08:30