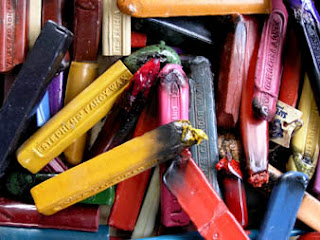 First day, and late already, for the very good reason that I am in Germany sans laptop until too late to  post tonight.
So ... the sealing wax.
'Inherited' insofar as I found a cigar box of it in a cupboard when clearing out my aunt's flat after she died.

It reminded me of when parcels used to be made tamper-proof by holding a lighted match to the end and dropping a melted red blob of wax onto knots and intersections of string, me fearful that the parcel would be set alight.
But at the time I rescued these I was more taken with the idea of imprinting molten blobs wth a seal or signet ring.
In the end I simply stored it, just to smell and look at now and then.
Posted by Sandra Davies at 11:23