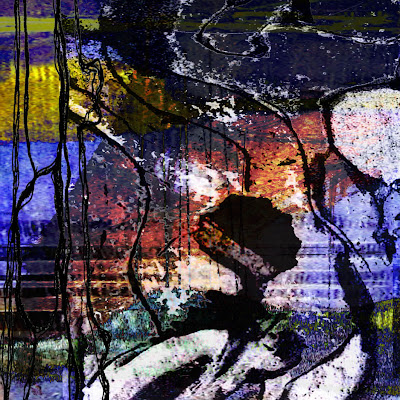 Slipping from his grasp I swam away then surfaced, shaking water from eyes which pleaded a repeat performance;   speedily, satisfyingly supplied.

As reward I promised to renounce all stripling lads, but no sooner spoke than from the trees emerged, moonlit, a veritable full-grown lusty man who’d been spying on us from the bank.

More than just my conscience pricked, but he surprised me, shouting  ‘Gabriel, if that’s your wife, I vow you did not over-paint this lily – remember, Brother, share and share alike!’

Gabriel’s fury roared:   ‘By Christ, I swear you’ll try cockles if you lay a hand on her!’

This is part 13 of 'The blacksmith's wife' which opens with her tied naked to a post in her husband's forge, he intent on branding her, having caught her with a younger, more beautiful lad.   The whole is a prompt-led serial  which began in March  and continued, one hundred words at a time, for forty-one episodes.   One of my aims in this 100 days project is to complete the illustrations for each episode and publish the tale in book form - comments would be appreciated.


The  story can be read in its entirety here