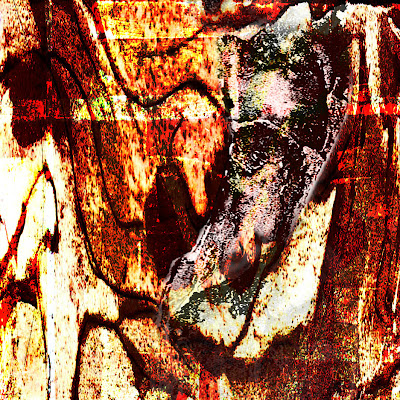 Blood or anger spooked the stallion, who reared up before (shears necessarily abandoned) he was controlled then let his head, speed and darkness saving my embarrassment through the village.

But I had slid and rested tight to Gabriel’s groin, becoming full aware of the potential for diversion (though thus far reverse psychology had proved unreliable.)  But motion and the length of ride had their effect, placing us in semi-pleasurable purgatory.

A belt of trees, a river:  he halted there, dismounted, pulled me down. ‘Water cleanses as does fire – this is perhaps the more effective discipline.’

We entered the river, clinging.

This is part 11 of 'The blacksmith's wife' which opens with her tied naked to a post in her husband's forge, he intent on branding her, having caught her with a younger, more beautiful lad.   The whole is a prompt-led serial  which began in March  and continued, one hundred words at a time, for forty-one episodes.   One of my aims in this 100 days project is to complete the illustrations for each episode and publish the tale in book form.
The  story can be read in its entirety here
Posted by Sandra Davies at 06:13