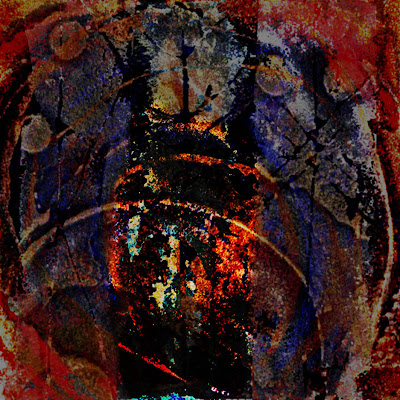 ‘Would you brand the mother of your son?’
A downward stridulation as he slotted irons into the notched retainer, lettered ends rammed into the fiery heart.
‘When did you last bleed?’
‘Eight sennights ago last Monday.’
Another four screeched into place.
‘Sweetling, you lie.’
Smiling malevolence, an upward wrench, iron against steel.   The speed with which he turned and crossed the hard earth floor surprised me and despite intent I flinched at the first touch upon my spine.
His fingertip.
‘False alarm,’ stubble-breathed against  my neck.  ‘As was your claim, evidenced by the blood now running down between your legs.’

This is part 4 of 'The blacksmith's wife' which opens with her tied naked to a post in her husband's forge, he intent on branding her, having caught her with a younger, more beautiful lad.   The whole is a prompt-led serial  which began in March  and continued, one hundred words at a time, for forty-one episodes.   One of my aims in this 100 days project is to complete the illustrations for each episode and publish the tale in book form - comments would be appreciated.
The  story can be read in its entirety here