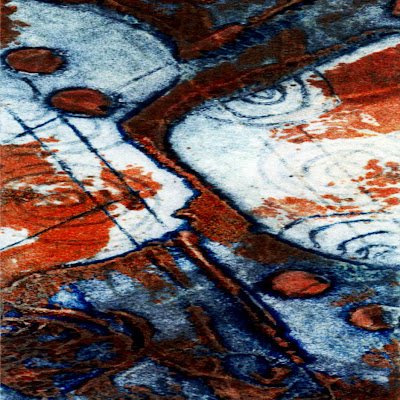 Both brothers being too well-bled to travel it fell to me to deliver details of imminent invasion to the port authority.
Mathias, weak, well-bandaged and firm-manacled, supervised re-stitching of the packet.
‘They expect me … will pay cash ..’
‘How much?’
‘Say … seven sovereigns …’
To Gabriel, anxiously, from my mare, ‘He’ll not break free again?’
‘If he tries I’ll end what you began.’
‘I did not finish?’
‘You merely nicked him, bloodily ‘tis sure and he has yet to learn it, but he is still a man.’
‘And you’ll let him be?’
Shame-faced, obdurate:  ‘He is my brother.’


This is part 20 of 'The blacksmith's wife'.   The whole is a prompt-led serial  which began on the Friday Prediction, in March  and continued, one hundred words at a time, for forty-one episodes.   One of my aims in this 100 days project is to complete the illustrations for each episode and publish the tale in book form.    The  story can be read in its entirety here.